Gig is a slang term meaning a job for a specified number of time. This term is often used by bands for a one off musical performance. This word has found its way on the mainstream business vocabulary as more communities nowadays trend to the Gig economy. 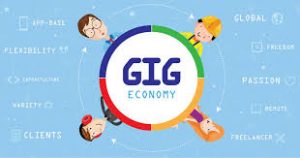 A Gig Economy is defined as a free market system in which temporary positions are common. Some good examples of this are Freelancers, Independent contractors, project-based workers and temporary hires. They are also called “Gig Workers.” They are commonly found in many industries. They can be writers, ride share drivers, photographers, accountants, realtors, handy man, tutors or anyone who enters into a formal agreement with a company to provide services without being in the company’s payroll. With the digitization, the workplace now is becoming more mobile. Many employees now can find many jobs across the world and employers can find the best individuals for a job without as much geographic strain. The Gig Economy also saves business resources like benefits, office space, and training while providing employees benefits like the freedom to select jobs or gigs that they are interested in. While this flexibility is appealing, gig workers trade this for little or modest pay, little or no health benefits or retirement benefits.